"I used to think patient advocacy was only for people unable to speak up for themselves: vulnerable patients in community care, or those with mental health difficulties. I believed that advocate groups were big organisations that fought only for big issues, like patient rights, patient representation and disease awareness. I now know that advocacy is about so much more."
- Susie Birney

What is patient advocacy?

The way I see patient advocacy has changed completely since I became a member of the European Association for the Study of Obesity (EASO) and Novo Nordisk's Disease Experience Expert Panel (DEEP). I now understand that a patient advocate can be anyone who lends their voice or acts on behalf of patients to inform the wider world – including the public, politicians and healthcare providers – about what living with obesity is like and about appropriate treatment and care. I've also realised that in many cases – that's me!

I became an advocate – by accident

It all started in 2009, when I joined an online patient support group through a weight management clinic in Dublin. I became a group administrator, and was soon contributing ideas on how patients could support each other. These included family walks (suitable for all fitness levels), healthy lunch meetings with recipe swaps, and local activity programmes for people to meet up and encourage each other. I was acting as a patient advocate without even knowing it!

Now, as a member of EASO and the Association for the Study of Obesity Ireland (ASOI), I continue to share my experiences as someone who has lived with and still battles obesity. I have spoken at an EASO policy conference, and I am now participating in projects to support people living with the disease. The more I am involved, the more I want to be involved.

What does it take to become a patient advocate?

People living with obesity can start by supporting each other. It can be as simple as just meeting up in a small group to share experiences. Online support groups, if they are private, can also be highly effective in fostering mutual support. These may not sound like powerful solutions, but their impact can be surprising.

A couple of years ago public funding was withdrawn for bariatric surgery in Ireland, which is far behind other European countries in terms of surgeries per year. In response, our support group got together and approached local politicians demanding answers. This led to the question being raised in parliament: why is this life saving – and cost saving – treatment being denied to those in critical need? Meanwhile, individuals put their privacy aside and appeared in national media to highlight the urgent need and the benefits of the service.

Funding was soon restored, and since then a new surgeon has been employed and the waiting lists have grown shorter. There is no proof that patient involvement created this positive change, but the empowerment it gave patients to use their voices was incredible and inspiring to witness.

Anyone can be an advocate for change

So when I think about patient advocacy now, I don't just think of large groups, like Obesity Action Coalition  or EASO. I also think of individuals who go out and raise awareness and change opinions every single day. People like Marty Enokson from Canada, who has been awarded for his efforts, and who encouraged me to find my own voice. People like Paul and Angela Chesworth from the UK, who continually put themselves out there to be heard.

These individuals, and many others worldwide, have made me realise that there is strength in numbers. No matter whether you are involved in your own local community or part of an international advocacy organisation, your voice can contribute to huge and positive change.

How you can get involved

If you are living with obesity, focus on the outcomes that matter to you. Ask difficult questions about gaps in care and treatment. Make your voice heard through survey responses that give community health officials and hospital leaders useful feedback on the perceived quality and accessibility of healthcare services. You can also get involved in changing behaviours, raising awareness and educating people – and this can start with your own family and friends.

We all need to lobby for change in the public sphere, and this is where social media can be a powerful tool. The recent publication of an international fashion magazine with a plus size model on the cover sparked a heated online debate, and of course many vitriolic comments about "promoting obesity". And yet, for the first time ever, I felt that there were just as many positive and encouraging comments from professionals and members of the general public. More, I felt, than ever before.

The change may be slow, but it is happening. And it is happening because patient advocates are standing up and speaking out. Strength in numbers can and will accelerate this process and increase the number of voices defending those who cannot defend themselves. Working together towards a common vision can empower ordinary people to achieve extraordinary results. 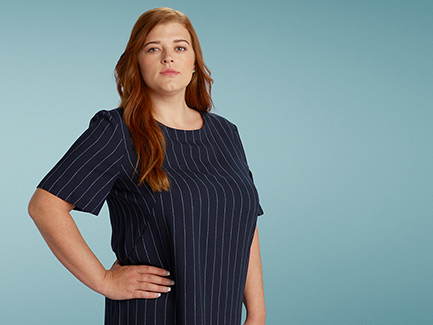